We’ve all been out there making hay in 84 degree heat at 9am. It’s summer and it’s time to get choring. Depending on where you live in the world, that heat will linger even longer into the year. So, how do you get your hay bales finished and not pass out from heat exhaustion? Small Farm Innovations has a few tips.

Tips to Maximize your Hay Making

How can a farmer make the most hay?

Many people have their own formula and related work process for making the most hay. Some wait until later in the year, while others cut it a little early. One thing that happens across the board is everyone hates cutting hay in the summer heat. To answer the question, a farmer can make the most hay when he can let it grow to maturity and cut in time to dry in the sun.

What is the best time for hay baling?

The best time for making hay and hay baling is whenever you can get it done. The overall goal is making sure that you get the hay baling done. Beyond that, it’s making sure your hay has the best nutritional value when cut. Cut it to early and leave it to bake in the sun exposed for weeks and risk developing bacteria.

But when you have proper storage, any time can be the best time for baling efforts. 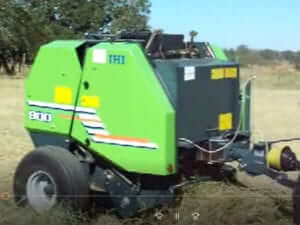 Round Bales vs. Square Bales: Which is Better?

Round Bales what you tend to get from a hay baler. The process to wrap it in twine and spit it out has been fairly typical for decades. However, round bales while containing heat, also tends to fix where that potential dry spot spreads.

Square bales tend to be used for more agribusiness ventures. Things like pumpkin patches and live events. Round Bales tend to work better for feeding livestock because they have less exposure to the elements and less of a chance to develop bacteria. After all, you don’t want to feed your animals material that will get them sick.

Square bales are way more open and exposed to the elements, so their shelf life remains quite low. That doesn’t mean you can’t make square bales, it’s just that they aren’t ideal for long term deployment.

Staying Safe from the Heat while working

Hot weather can stretch beyond the months associated with summer labor. A lot of farmers won’t bale hay during extreme heat due to high leaf loss. Others will have trouble finding seasonal help to get it done.

The best advice for feeling sick in the heat is to seek the advice of your family physician or immediate care. But, do you know the signs of possible heat exhaustion?

What does this all mean?

Basically, whatever you do with your efforts…do it safe. There are so many factors that can impact your work depending on everything from temperature to storage and even usage. The best way to maximize your efforts is just to be aware of everything that can go wrong. If you take the time to find what works best for you, then you’re going to produce your best work.